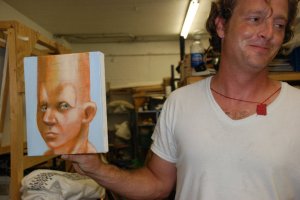 Every morning at 6 a.m., my friend, the talented painter Ian Anderson, loads up his bicycle with art supplies and heads to downtown Houston. He sets up and waits for the sun to emerge and highlight the buildings — and then he paints tiny landscapes of the skyline with a limited palette of a colors.

I spent some time with Ian in his studio recently and leafed through the piles of paintings on paper. He said that he hopes to have a show of the works one day, but in the meantime, he’s glad to be painting as much as possible. And, more than anything, he really enjoys what he is creating, every aspect of putting brush to paper and every pedaling adventure in the early morning.

Ian also showed me his failed ideas — the things he started working on but no longer wants to pursue. For a painter who once had trouble getting motivated to create, he seems to be on a hot streak.

Before heading to Ian’s, I popped into visit my other super talented Houstonian artist friend, Kevin Peterson. His studio was also full of new works, which means tons of time spent at the easel, for someone who paints every realistic detail in his fantasy pieces of children walking through the detritus of a city with wild animals at their heals.

I always have liked to spend time with Kevin and Ian, not only because I love the paintings they create. They are hard-working, dedicated and critical in a way meant to promote progress. I think it’s important to surround yourself with people who have a work ethic and dedication that you would ideally like to share.

A lot of people will agree that talent is secondary to putting in the hours of work required to create something great. But then again, few people actually will sit down and toil until they reach a breakthrough. I really do believe that it’s all about hitting the pavement and being dedicated to taking the journey, spending years trying to get better and constantly striving.

“Continuous effort – not strength or intelligence – is the key to unlocking our potential.” — Winston Churchill

2 thoughts on “Hitting the Pavement”